The Presidential Federal Pardon Application process can seem confusing and difficult to understand. This simple guide works to address the mystery surrounding how to apply for a federal presidential pardon. 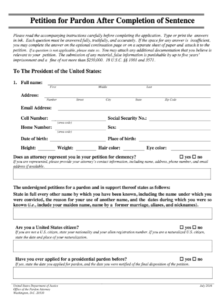 WHO CAN APPLY FOR A PRESIDENTIAL PARDON?

WHAT IS A PRESIDENTIAL PARDON APPLICATION?

WHEN SHOULD I SUBMIT A PRESIDENTIAL PARDON APPLICATION?

WHERE DO I APPLY FOR A PRESIDENTIAL PARDON?

WHY ASK FOR PRESIDENTIAL PARDON?

Is it Hard to Get Presidential Pardons ?

Applying for Clemency While Waiting for Case to be Resolved

If you are an inmate who is currently in litigation, challenging your conviction, then you cannot generally apply for a presidential pardon.  There are several well-established principles that preclude the Office of Pardon Attorney from processing a clemency application while litigation related to a case is pending.  However, should the case be resolved in a way that is adverse to you, and no other litigation will follow, then you may submit a new petition to the Pardon Attorney’s Office.

Can you obtain a Federal pardon before being indicted, convicted, or sentenced for a federal offense?

Can you get Access to an FBI Criminal Case History from the Pardon Attorney?

Do you need to provide Additional Information to the Pardon Attorney after filing an application?

Can the president pardon those convicted of State Crimes?

What is The Difference Between a Pardon and Commutation?

One thing that is important to note as we discuss all aspects of presidential pardons is to understand the difference between two forms of clemency:  pardon and commutation.

Can a pardon restore the Right to Possess a Gun?

Is a letter of recommendation from a public official necessary to a presidential pardon application?

Why does the pardon application need to be notarized?

What are those reviewing a pardon application looking for when deciding on a recommendation to the President?

Of course, everything that is part of the pardon application is relevant and important.  That said, it is fair to say that when the Pardon Attorney reviews an application, the evaluation is very focused on the following aspects of the applicant’s life:

In addition, the Pardon Attorney may find persuasive value in official recommendations from knowledgeable officials who were involved in your case.  That includes the United States Attorney for the district in which the conviction occurred and the sentencing judge.  Because those individuals are so intimately involved in the case, their perspectives hold great weight.  Finally, as noted earlier, the overall candor in the application is very important to the evaluation of the pardon request overall. Besides this ,all the federal pardon application related supporting documents should be verifiable and legitimate.

How Long Does it Take for a Decision on a Pardon Application?

What happens if a new President takes office while an application is pending?

Is a Pardon also an Expungement of the Offense?

What is a Pardon ?

To understand definition and meaning of pardon Visit Here

What is the presidential Pardon Process ?

What You Need To Know About The Pardon Attorney Office