A person who is incarcerated and who has exhausted all of his or her appeals can look to one additional avenue for relief to shorten his or her time in prison – a commutation of sentence.

In this article, we will answer all of the important questions surrounding sentence commutations, including how to apply for a commutation of sentence. If, after reading this article, you want to learn more about whether you are eligible for a sentence commutation, then we invite you to request a free initial consultation with attorney Brandon Sample.  Simply submit a free consultation request form, or by call us at 802-444-4357.

Let us now cover some of the most frequently asked questions about applying for a commutation of sentence.

What is a Commutation of Sentence? 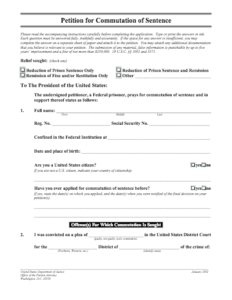 What Is the Significance of a Sentence Commutation?

Who is Eligible for a Commutation of Sentence?

A person will generally not be considered for a commutation of sentence unless:

With regard to the standard for what would support a successful commutation application, in federal cases, for example, the president of the United States considers the following factors:

How Does Someone Apply for a Commutation of Sentence?

How Long Does It Take to Receive A Sentence Commutation?

Can the President Commute a Sentence for a State Crime?

Is a Commutation of Sentence the Same as a Pardon?

Can Someone Seek Commutation While Still Challenging His or Her Conviction or Sentence?

Is Commutation of Probation, Supervised Release, or Special Parole Possible?

Does a Commutation of Sentence Have Any Impact on Immigration Status?

Is There a Penalty for Making False Statements on a Petition for Commutation?

How Much Criminal History Information Must be Disclosed on the Application?

Is Any Type of Hearing Held in Connection with a Commutation Petition?

To give context to this discussion, some examples may help. Let's take a look at two high-profile federal sentence commutations under two different presidents.

A commutation of sentence, on either the federal or state level, is a form of executive clemency that allows mercy to be given to a person who is already serving a prison sentence. A commutation does not mean that a conviction is erased, but rather that the punishment for a crime is substituted with a lesser form of punishment. It could manifest in the reduction of a prison sentence or changing a death sentence into a sentence of life in prison.

The lengthy commutation process is guided by standards that account for all of the circumstances in a petitioner’s life, including the seriousness of the offense and the severity of the sentence. Be sure to check out other articles on https://clemency.com for information on other forms of executive clemency.

If you or a loved one is interested in applying for a sentence commutation, feel free to request a free initial consultation from attorney Brandon Sample. You can request a consultation by submitting a free consultation request form, or by calling 802-444-4357.