Colorado Governor John Hickenlooper, in his final month in office, granted clemency to six Colorado prisoners who were sentenced to life in prison without parole.

All six were young at the time of their offenses, and they will now have a chance to go home. 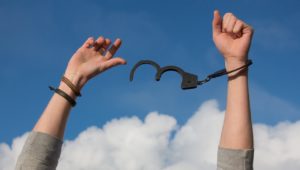 "These decisions are not made lightly," Hickenlooper said in a statement.  "It is our belief that young offenders who have grown into exemplary individuals, and who have clearly learned from their mistakes, should be considered for a second chance..."

Profile of One Colorado Clemency Recipient

One of the six "young offenders" being given a second chance, as reported by Colorado Public Radio, is Curtis Brooks.

Brooks was homeless back in 1995 when he was 15. He met up with three other boys at a shopping mall and together they made plans to steal a car. It didn't go as expected. One of the boys--not Brooks--shot and killed 24-year-old Christopher Ramos.

Brooks was convicted of first degree felony murder and sentenced to life without parole.

In 2012, the Supreme Court decided that automatic life-without-parole sentences for juveniles are unconstitutional. It made the decision retroactive in 2016.

Individual states have had to review all such automatic sentences. Around 48 juvenile offenders in Colorado fell into that category.

The Supreme Court's decision is by no means a free pass for anyone. Life sentences may still be imposed, they just can't be automatic.  Colorado's legislature promptly passed a corrective bill that replaced the automatic life requirement with a range of 40 years to life.

Juveniles convicted of felony murder, like Brooks, would be eligible for even shorter sentences. Brooks served nearly 24 years in prison before receiving a commutation of his sentence.

The governor's office in Colorado has received more than 500 requests for clemency from the Colorado's clemency board in the past eight years. Although Hickenlooper had issued 135 pardons, he has granted them all in the past year. December's six commutations were the first ones he'd issued during his eight years in office.

Some legal experts thought Hickenlooper might avoid granting clemencies altogether so he wouldn't be thought of as soft on crime if he decided to run for president.

Response to Grants of Clemency

The governor's office notified the victim's family to let them know that Brooks would soon be released. An email from the District Attorney's office said they were "devasted" by the decision. They felt that if Ramos wasn't able to have a second chance, neither should Brooks.

While Brooks has been in prison, he has made efforts to improve himself, such as studying philosophy and foreign languages. He hopes to put his personal growth to good use--outside of prison.

"I think it would be the biggest waste and the greatest disrespect if I just sat in prison for 24 years biding my time," Brooks said.

Brooks also has his share of supporters, who attend his court hearings. One of these is his elementary school principal, Bruce Grode, who happened to be a juror on the case and is now a Maryland state senator. Grode regrets the conviction and has fought for years for Brooks' release.

The original trial and sentencing judge has also been supportive. He wrote a letter to the governor in support of clemency and release for Brooks.

Brooks has received a commutation of his sentence, not a complete pardon.  A pardon wipes out a person's criminal conviction and record as if it never happened. Brooks still faces five years of probation upon his release.

Federal grants of clemency can be just as rare as they are in the various states. If you have questions about the federal clemency process or believe that you may be eligible for relief from your sentence, contact the Law Office of Brandon Sample. The firm also works with attorneys at the state level to secure clemency for those convicted of state offenses.