The inability to pardon state crimes is one of the few restrictions imposed on the President of the United States. State governors hold the power to grant clemency to those convicted of state offenses.

Difference Between the Pardoning of Federal and State Crimes 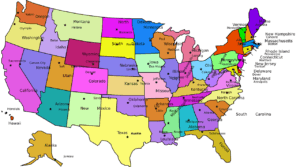 The governor of the state in which the state offense was convicted holds the power to grant clemency of state crimes. Every state is slightly different in their process of granting clemency. Here are a few examples of how the clemency process works in some states.

Pardon applications at the Colorado state leve go through a more truncated process. The application is verified and it is determined that all information is provided. The application then goes directly to the Executive Clemency Advisory Board who reviews the application and then provides a recommendation to the Governor.

For Kansas state offenses, there are multiple forms a petitioner must fill out. First is the Notice of Clemency Application-Sentencing, which must be sent to the Judge, Prosecuting Attorney, Sheriff, and Police Chief of the county where the offense was located. Second, the petitioner must fill out the Request for Publication Form,which will be sent to the official county newspaper where the conviction took place. Finally, the petitioner must fill out an Application for Clemency, which asks for the explicit reason why clemency is being sought and information regarding the applicant’s conduct since conviction if seeking a pardon for state crimes. If an attorney assisted the petitioner, the attorney must also fill out an affidavit. All applications are sent to the Prisoner Review Board. The Review Board examines all reports, conducts interviews, and investigates. They will send a report with a recommendation to the Governor who has final say. Kansas lists their clemency application statistics from the past years. In 2016, there were 30 applications sent to the Prisoner Review Board and none were recommended by the Board for granting clemency.

New York petitioners can only apply for commutations or pardons of state crimes. New York separates their pardons into a standard pardon and pardons for individuals who were either 16 or 17 when they committed their crime. All applications are sent to the New York State Department of Corrections and Community Supervision Executive Clemency Bureau. The Executive Clemency Bureau reviews all applications for clemency. An application for a pardon of state crimes requires a form to be filled out but also requires a petitioner to write a letter describing their need and their accomplishments. A commutation only requires a letter describing their need. There is no required form. The Bureau will send their recommendation to the Governor. In 2015, the Bureau received 290 applications for commutations of sentences. Three pardons and three commutations were granted.

California requires a petitioner for a pardon of a state crime to obtain a Certificate of Rehabilitation from the Supreme Court of California. For those who now live outside of California, they must fill out an Application for Gubernatorial Pardon. If a person receives a Certificate of Rehabilitation, then it is automatically sent to the Governor where he will determine if a pardon of the state crime will be granted. The Governor’s Office will forward the application to the Board of Parole Hearings who will conduct a background investigation. There is no prediction on the length of time this will take and a petitioner will not be able to check the status of their application. For commutations of a sentence, there is a separate application form.

Florida allows the governor to grant pardons or commutations of state crimes. Florida divides their pardons into three categories: full pardon, pardon without firearm authority and pardon for misdemeanor. They also allow remission of fines and restoration of civil rights or alien status. Florida also states that all clemency grants are conditional. If any conditions are violated, then the clemency will be revoked. Florida imposes certain types of requirements before a person will be eligible for certain clemency grants. Applications are thorough and require significant documentation and explanation of crimes and to show remorse. All applications are sent to the Coordinator who will conduct an investigation and notify all law enforcement and legal offices that were involved in the prosecution of the offense. If the requirements are met, the application is sent to the Florida Commission on Offender Review. The Commission will send a recommendation to the Governor.

This is just a brief summary of some states’ clemency processes. Many mirror the federal process in which an administrative body facilitates an investigation before sending a recommendation to the president.